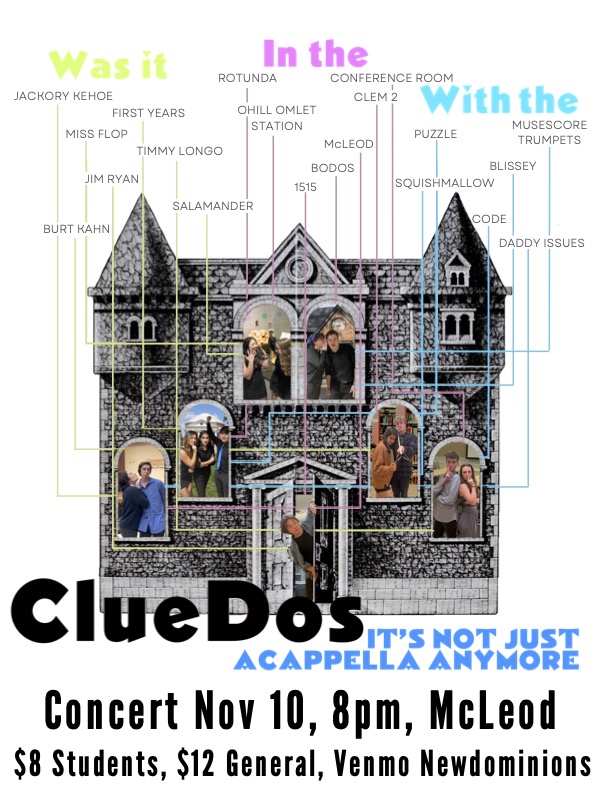 Welcome family and friends to the New Dominions fall concert! My name is Emily Pasquinelli and it has been an absolute joy to serve as President for the last two semesters. On behalf of everyone in NewDos, we simply could not be more thrilled to be surrounded by all of you tonight. All of us have worked so hard this semester to put together the diverse and exciting set list you’ll hear this evening; we are so eager to share it with you all!

Tonight our theme may be “ClueDos”, but when I look back on this semester it’s no mystery at all how we made it to this point— a concert that we’re all so proud of. Instead of Professor Plum in the library with the candlestick, I blame our Music Director Jack in  the Commonwealth Room with his incredible arrangements. Or maybe I’ll accuse our three wonderful Newbs in the lawn audition room with their killer voices. Or perhaps it was *gasp* every single NewDo in each rehearsal with their admirable dedication.

Whoever the culprit is…I am grateful and proud to have the opportunity to perform alongside the most talented and compassionate group of people I’ve ever met. NewDos continues to be the best part of my UVA experience! Thank you all so much for the love and support, we can’t wait to share some great music with you.

Intermission- Performance by Hoos In Treble

The Weekend by Sza- Arr. Jack

❤️ by Coldplay, We Are KING, Jacob Collier- Arr. Jack

Talk Too Much by COIN- Arr. Jack

Everybody Wants to Rule the World opb Tears for Fears, Cover by Sammy Rae and Friends- Arr. Noah

The Newdos are all suspects for the murder of Burt Khan. These are their alibis.

Noah was too busy doo-doo-doing computer science to be the killer. On the bright side, he got his code to run! Yay Noah!

Jules could never be the killer right?!?! Then again…they are taking a Gender and Espionage class this semester, so would we ever really know if they were?

Weapon of choice: The Gay Agenda

Jack was busy playing Mario Kart when the murder occurred. He was honing his skills to ensure his domination in the next Newdos tournament.

Emily was at home cooking up her world famous sauce. Apparently she’s a messy cook because her apron is covered with red stains.

Jacob was allegedly memorizing his 8th Dallas Cowboys Cheerleaders routine. While no one could corroborate his story, he did execute a perfect rendition of their Thunderstruck pre-game entrance.

Becca couldn’t be the killer, she was in class— no wait, working at the hospital— nope she was volunteering at the gym?!? At any rate, she was far too busy to kill anyone.

Sam Harless, Master of the Web

Sam was too busy to kill anyone, as he was thoroughly trouncing the rest of the Newdos on the pickleball court. One day he will dethrone the King of Pickle

Weapon of Choice: his recorder

Nathan says he was too tall to commit the murder. He then went on a 10 minute rant about Sam’s ambitions to dethrone the King of Pickle.

Weapon of Choice: got kik?

On the night in question Emily Pitts was moderating a Model UN conference. Any killing that was done was to her soul as she sat there rethinking her life choices.

Hayden was too busy tap dancing their way between rehearsals to be anywhere near the site of the murder, though a well placed brush ball-change could be enough to silence someone forever.

Weapon of choice: Hamilton the cat

Alexandra was far, far away from the crime scene on the night of the murder; she spent the whole night in her room practicing runs.

Aimee was too busy studying for her 16th anatomy test to be the killer, though now she can identify each and every part of the victim’s body. We’re so proud of her!

Ethan was looking for his electric scooter after someone stole it straight off the bike rack. He’s on a path to revenge, and he won’t let anyone stand in his way.

Charlotte refuses to say where she was the night of the murder, but rumor has it a british woman that looked just like her was seen on grounds that night.

After the concert, please join us at 336 15th St for our after party! 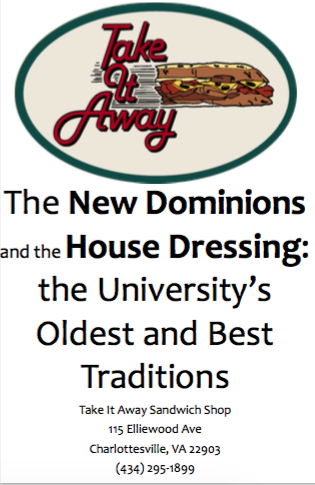